A year ago this coming February I decided that it was time I lost weight. At least this is what I thought I had decided. Turns out, it was the end of a long road (and the start of another, of course), the very first time in 41 years that I actually decided to put myself first and turn my efforts towards myself.

I have received so many compliments lately about the way I look and people asked me what I did. It puzzled me that I could not answer. To say I lost weight … this was just one tiny thing. To say I changed my view on life … oh come the freak on!

This morning’s run laid it out to me in plain sight: what I did was that I put myself first. If at any point my journey can be useful to anyone, here it is.

Our breakdowns are earthquakes – and angels come in so many different shapes.

People, people, people, left and right, passing me by … I was walking aimlessly down the subway corridor and felt as if I was in a bubble. Filled with a void that I could not even begin to touch and that hurt the same way loud screeches hurt our ears. Looking at the people around me I envied the lives I imagined they lived, so much better and more meaningful than mine. I envied the energy I perceived they had and I didn’t I envied their wish to go on living that I no longer had. One step in front of the other, down the stairs, on the platform. People, people, all around. So busy and yet so lonely. If I just floated away … who would notice?

My floating is stopped by the subway driving into the station with a shocking noise. Hundreds of people on the platform, other tens inside, who knows how many doors a subway train has and how one decides the door to pick to get in or out. Train stops, the doors open and Laura walks out. I remember this because she told me later. I do not remember her there. Or me for that matter.  It is also later that she told me that she was looking at me, knew who I was but could not recognize me. No wonder, I was walking around naked of all filters I could no longer sustain. And I had been for a while, hurting and bleeding everywhere. She was the only one who saw ME. I realize now I never asked her where she was going or if I changed her course but she took my hand and walked back inside the train with me. I do remember asking her “have you ever felt like God deserted you?” and her responding: “no, never” with a certainty that shook me into trusting that she knew something that I didn’t. 7 years ago my life was saved on a subway platform by my soulmate and

I did not receive anything on a silver plate, it was going to be the first step of a tough time but I would not change any of it. Not the depression, not the anxiety, the panic, the not eating, not the crying, the desperation, the desertion, nothing. Looking back, I realize that there is truly no step in our life that the Divine does not know and allow for our growth.

Present yourself the way you want people to regard you

I met my true professional leader 5 years ago. Someone who looked at me – AT ME – saw what I did not see and asked if he could be honest. I said yes, skeptically, there wasn’t much I was willing to learn.  I was in deep turmoil internally and what could anyone tell me that would pull me out of that hole? Apparently, this phrase: show yourself to the ones around you the way that you want to be regarded.

My leader talked to me about demeanor, posture, clothing and inspired me each and every day to see myself, care for myself, carry myself in a way that is simple but dignified. I am not sure if he will ever realize that in that moment when he asked “can I talk to you about the way you dress?” he was actually reaching out to me, pulling me out of a funk.  5 years later, he remains, the only man (as in “male”) who has not let me down. And not because we never disagreed – we probably disagreed more than some – but because he always truly cared.

Life is hard. Some angels come to us as coaches.

I had been a therapy groupie for years. Cognitive Behavior Therapy was a saving grace for me at one point in my life but a couple of years ago I felt I needed something else.  So I turned my attention to coaching.  Looking at the relationship I built with my life coach Maria Iris Hoeppe today you would not believe the fact that I googled a coach and she popped up and I chose her.  The Universe does conspire.

I quit twice before going to see Maria.  I made the appointment and canceled twice. The way she kept me hooked was her ease in saying “that is ok, we will meet when it is time.” This intrigued me. I wanted that peace about life. So I met her and we clicked instantly. I went to coaching for 10 sessions which were enlightening and thought provoking but it turns out that my second batch, the ones I am doing this year, are the truly illuminating ones. As Maria puts it, we are getting closer to the core.

I did go in thinking that it will be hocus pocus. I was skeptical and tried VERY hard to stay real. Maria helped me with every session and in between to see myself with different eyes. The fact that I came to know Maria as a non-bullish person prompted me to wonder – how come she sees me in a completely different way? How can she see strength and wisdom where I see smallness and insignificance? Something must be wrong with this picture. So we worked to unravel what ate at me from underneath all the layers and replace old and harming beliefs with light, power driving ones.

It is largely because of my meetings with Maria that I sit here today speaking “from my light” and not “from my darkness.”

You get out what you put in

Last year, February, hop on the scale again – 71 kilos. Waaaay worried! I wasn’t pregnant . I had just given up on myself. I had simply treated my body as a …. recipient of whatever needed to be put in so that I could function.  Whatever that meant.

Over the years I tried a series of diets. Dukan, not eating, just fruit, just water, dissociated. Everything worked for a while and then things got worse. So I decided to go a completely different, much more personalized way: I contacted a nutritionist. Dr. Ramona at Nutrislim guided me and still is in re-establishing a way of healthy eating and living.  I underwent tests, they got to know me first and worked with ME. We did not work on recipes that were pre-prepared, we looked at ME and decided what was right for ME and what I could work with.

I remember the first time I got up on the scale. It said: metabolic age, 46. WOW! The shock! How did it know how old I felt? I wanted to quit every day for the first 3 weeks but the doctor kept me in check, encouraged me and did not let me quit. When results started to show, I was in awe, I could not believe I was able to do this. 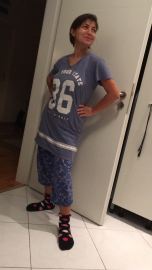 The reality is that I did not just go on a diet. I changed my lifestyle and the one of my family’s – whose support was key!  I became mindful of the food we were feeding our bodies. I started cooking lunch for all three of us every morning and I am a firm believer that, apart from the simple and light ingredients, my love for them also helps their feeling good eating what I cook.

I bought myself a water jug to carry exactly the amount of water I needed to drink daily – I knew that my days are filled at the office and I would never get up to get a drink unless I had it right there. Instead of leaving things to chance, I set myself up to win with simple things – like a water bottle.

Jazz – is one of our saviors. Ours as in my entire family’s. Walking Jazz every day has given us clean air, movement for our bodies and time together. And little by little Jazz helped me discover the joy of movement. A year ago I would have laughed at the idea of waking up at 4:45, without an alarm to go out and run. This morning’s joy at doing that showed me that a shift has happened in me.

There is no time. No time. Time, time, time … The most valuable currency there is. Maybe it is my going over 40 that I felt really prompted to make the best out of every single minute. So, I cancelled Facebook and started reading and looking at people, cancelled fake relationships and really involved all of my time and energy in those few real ones, subscribed to podcasts and started using my traffic time mesmerized by listening to other people’s stories of hurt and of prevailing.  And I started doing one thing at a time.One Thing At A Time. Say this, slow, let it sink. It is the phrase that saves lives.

Not a day goes by when I don’t quit something. When I don’t second guess myself. When I don’t feel like nothing is worth it any longer because I am out of sync, out of routine. 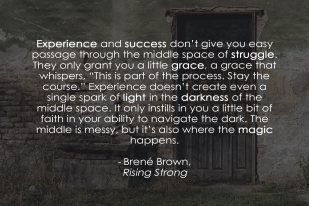 ing you believe that if you have failed once there is no reason to get up. I was in my late 30s when I heard and understood the meaning of the word resilience. This is the key.  There are good days and not so good days. Fall down, get up, dust yourself off and try again. And don’t take my word for it. Look for the change makers and the world renowned who say exactly this. It is not whether or not you fail that makes or breaks you, it is what you do next. How and if you got up. I used to be very nervous even thinking to write a something like this post. The fear that I wrote this and the next day my life would turn to rubble was so great that it did not allow me to savor any of my hard won victories. These victories have come in small moments and after great strides and if I don’t look back to embrace the joy they bring me, it won’t matter if anyone else does.

So the next time I am asked “what have you done that you look so good?” I might just tell people the truth:  I allowed myself to become a butterfly.