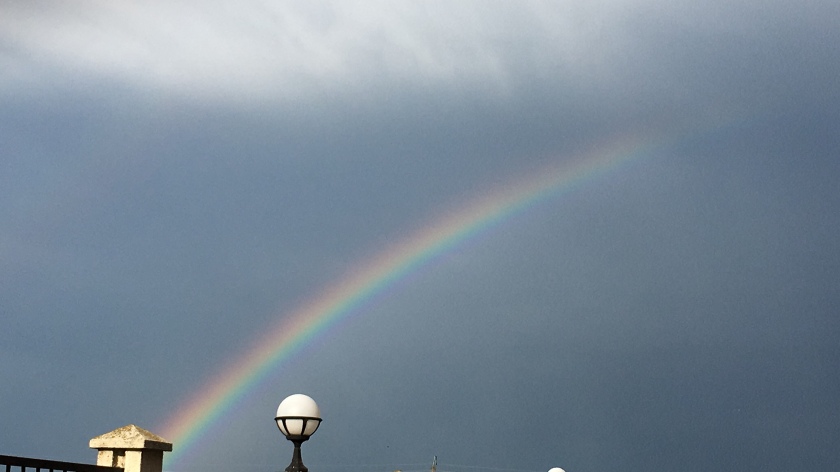 A parable about humans wanting more and not realizing what they already have goes something like this: a man prays for a bigger house. God, Buddha or just the eavesdropping rabbi tell him they have the solution. And to do the following: have another baby, relatives over, bring the cow into the house, his mother in law, the sheep, the dog. Probably not in this order and probably not these in particular but the idea was that the house was even more crammed and the man was furious. The thing he asked for and the thing he got! Communication failed somewhere in between. So he goes back to his advisor, literally or in prayer, to demand justice. And the powers that be tell him it is time to let everyone out. Oh, and what a grand house he discovered he already owned. Human nature: we take for granted what we have and we don’t value something until we lose it. Temporarily or permanently.

I would see many individuals I considered professionally successful and fulfilled declare that family is everything and, to be honest, I called bullshit. Yeah, right, now that you are successful and a millionaire, of course you can afford to spend a month with your family on a farm, detached from the maddening crowd.

I guess someone was eavesdropping on my wish to “strike it big” and realized I already had. Stricken it big. And called on my demons to teach me to see … . They seem to have a way with me … .

I have always been afraid to be alone. The moment I am left alone in a room, anxiety, restlessness, sometimes panic ensue. So, within the first five minutes I rush to fill my time with work, my eyesight with scrolling, my stomach with carbs, my hearing with a podcast. Anything, just let me not be alone with … me.

The reason I can put behind this great fear is that being alone taps into the bottomless valley that is my loneliness, an old, old friend. My first childhood memories are of loneliness (in one of the most crowded Bucharest apartments) and anxiety. The memory of these two feelings lingers so pungently on my heart and mind that there is nothing else I remember before I was … in my teens. I am sure that there were beautiful moments, achievements, times of joy, there are photos and stories my parents can tell. I do not recall any direct experiences that aren’t tied with deep loneliness and fear. Loneliness continued through my eleven year marriage, from my wedding day, and was only aleviated briefly when I gave birth to my son. When I say briefly, I mean for about 30 minutes after his birth. Oxytocin was sucked in quickly by the field of my brain constantly suffering from a happy chemicals drought and I soon succumbed to the panic and horrors it’s hemispheres produced every minute and … my even deeper loneliness.

An OCD suferrer for years, whipped daily by obsessive images of self harm and losing control, being alone meant facing the dragon (I had started to write devil but got scared that I’d conjure it and ended up changing the word 🙂 ). My anxiety ridden mind convinced me that, was I to be without anyone around, I would proceed to do unspeakable things or, even worse, live, and lose my mind. It made more sense to be afraid of such things than just of … what I could find in … me.

And then … last week came. And half of this one. And with them, the loneliest days of the last decade. I was alone, in a city that I didn’t know well, with nobody really to call because … everyone has their lives to live and care for, in a small room, with only myself to keep myself … entertained. I slept through the night once – on the fourth night – probably passed out is a better term. The nightmares were horrible – the people I love who have passed felt me shaking in my boots and saw an opening for a night show so they showed up. Nightly. I went through everything from not eating anything all day or eating the most incredible junk that made me sick after, to crying in the street, to watching dumb news on TV or scrolling endlessly before I realized it had been hours. I maxxed out on sleep stories and learned about tea ceremonies in Japan and Diwali in India (should have tried Calm’s poetic rendition of the entire GDPR text) to push myself back into sleep and away from panic. I worked from 6 AM until 7 PM. But … I did not do any of the things I was afraid that I would. And I did not lose my mind.

The brief break in this nightmare were the two amazing days when my family came to visit. When, one week into braving the wilderness of myself alone, my family finally showed up, I could have exploded. I literally stood in the middle of the hotel breakfast room, looking out the window, waiting for their taxi to arrive. For 20 minutes. I ran to greet them, I could have jumped around them, over them, under them, kiss them, smell them, do anything for them. Anything and everything we did during those two days felt magical even if it was just a stroll. I waved goodbye to their taxi taking them back to the airport and started sobbing even though I was going to see them in three days (two and a half, but who was counting).

As I was unlocking the door to the room of my torture for a couple more nights, I had gotten it. And I could kick myself for ever thinking that a job, any professional accolades, any diplomas on the wall or money in the bank could bring me real joy.

The Universe had given me a hint, on my first full day away from them. As I was listening to a beautiful young man teaching us say how, regardless of what happens to him during the day, what keeps him going and brings joy to his heart is knowing that in the evening he goes home to his beloved partner and cats, my heart skipped a beat. Oh, so this is what those people meant: their families were their secret power, the well of energy that paved the way to success. It was there for me all along … .

I feel blessed with every lesson and this one was a toughie but a definite goldie. I feel a slowdown in this merry go round that my mind has been on for the past years. I have been looking for the things that matter in the wrong place. I already have my gems, right next to me, every day. Because I am lucky like that. One is now taller than me – though I gave birth to him only seconds ago, one loves me, the way I am and vowed to be a bird if I ever am one, one blue eyed heart of gold, is always there and always ready to listen, love and support me and two, stinky breath, furry, angels cannot contain their joy at seeing me when I have only just returned from five minutes in the bathroom. What. More. Could. Anyone. Ask. For??

Maybe the bonus of knowing I have been back into loneliness and this time, I did not lose myself and came back stronger. I know the secret though: my heart was held.